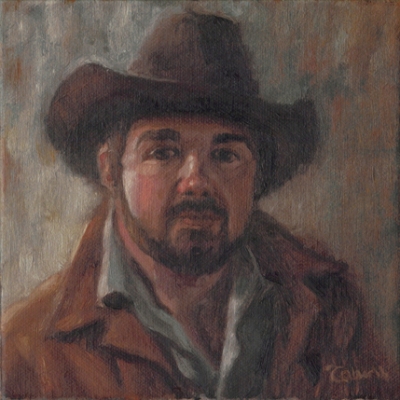 Chuck ~ 6″ x 6″ oil on canvas panel
Bid now in the Daily Paintworks auction
So, I’ve painted you cows, and I’ve painted you horses, so I figured it was time to give you all a cowboy.
This particular cowboy is a very close relative of mine, actually, my brother…and he HATES being called Chuck…so don’t tell on me…The name Charles just seems too sophisticated for a cowboy.
May 25, 2013March 9, 2014 by Tahirih Goffic Categories: boy in cowboy hat, cowboy, cowboy portrait, impressionism Leave a comment 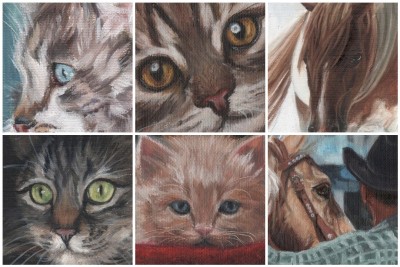 Hello everyone…sorry about the lack of sketches, if anyone noticed…but I’m trying to make a few bucks to pay for the deluxe printer I just bought, lol!  And I need special paper, too, and Crystal Clear Bags…
Uhhh…the business of art. I’d rather just paint, and let someone else do all the other work, but I’ve made a new years resolution to get serious this year, and treat it as a job instead of a hobby…see where that gets me.
These cuties go active on Ebay at about 6 pm PST,
Cheers, all!
February 8, 2011March 9, 2014 by Tahirih Goffic Categories: aceo, artist trading cards, cats, cowboy, ebay, kitten, painting horses 5 Comments 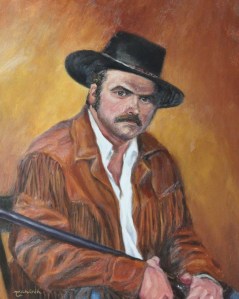 This is my latest commission, for my Uncle. I loved the pose, the clothes, and the kick-butt (with slight sly humor) expression on his face. It was from an old sienna photo and I colorized it, with the help of the authentic hat and jacket, and a ‘not-so-willing’ little brother.
July 29, 2010March 9, 2014 by Tahirih Goffic Categories: commissions, cowboy, old dress, old west Leave a comment

It’s finally done…I think. I’m not quite sure I’m satisfied, but I don’t really know where else to go with this one. I’ve done so much to it already, that I should have planned in the beginning for. If anyone’s wondering if it’s really worth while to do those thumbnail sketches…IT IS!! I only did one, that I was pretty happy with, but, it didn’t work when translated to this big canvas. It used to have three mid-ground figures, and a background guy on a horse, and a guy leaning against a horse in the far background. I decided it was too busy, and after many attempts at just trying to FIX everything to make it look like it was supposed to be there, I systematically began eliminating things, until there was nothing left to eliminate. This would all have been much easier to do before the painting was near completion…with the thumbnails…but once again, my initial enthusiasm for the subject overtook my logic, and I dove right in without proper planning. NEVER AGAIN! This one was so hard.
I want to put this one out for critique. I desperately need input from other artists, so if anyone thinks this painting needs some help, or could use something else, please drop me a line. I would appreciate it so much. Like I said, I’m not really sure if it’s done or not, so let me know what you think. It also needs a title. “Fresh off the Easel” just isn’t going to cut it.
I really want to thank Eduardo Amorim, the amazing photographer whose photo was the inspiration for this shot. Check out his work at Flickr by clicking on his name.

After a tumultuous past as a goat milker, laundress, fine art major, waitress and restaurant owner, I've now downscaled to running my own Cafe/Gallery in an effort to maintain a social life and make a few bucks. I live a ridiculously idyllic existence in a fairytale village called Bella Coola on the West Coast of British Columbia with my charming musician husband, two amazingly creative children, and a dog whose favourite past time is eating rotten dead fish and rolling in poo. In my not so spare time I love to invent healthy whole food recipes, write YA fiction, play guitar, or curl up in my favourite chair with a great book and a gigantic mug of strong black coffee, all while daydreaming of living in Ireland...