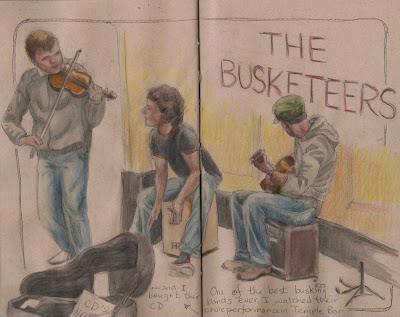 The Busketeers — Temple Bar, Dublin, Ireland
These guys were so talented and so entertaining, a mix between rock, irish, and slavic music that was captivating! The guy with the fiddle was hilarious. I stayed for their whole performance, along with a group of at least 70 other people they’d attracted in the street. And I bought their CD. It was a fun afternoon.

After a tumultuous past as a goat milker, laundress, fine art major, waitress and restaurant owner, I've now downscaled to running my own Cafe/Gallery in an effort to maintain a social life and make a few bucks. I live a ridiculously idyllic existence in a fairytale village called Bella Coola on the West Coast of British Columbia with my charming musician husband, two amazingly creative children, and a dog whose favourite past time is eating rotten dead fish and rolling in poo. In my not so spare time I love to invent healthy whole food recipes, write YA fiction, play guitar, or curl up in my favourite chair with a great book and a gigantic mug of strong black coffee, all while daydreaming of living in Ireland... View more posts