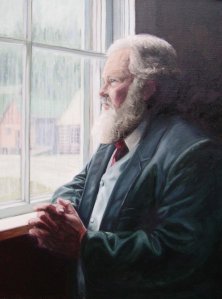 This is a portrait of the actor in Barkerville portraying the character of John Cameron, the first man to strike it big-time rich there. He discovered gold on December 22, 1862, but his wife had recently died, and he decided to return to Victoria in February to grant his wife her last wish, a decent burial at home, for she despised the cold, miserable north where her husband had his claim on Williams Creek. This is an amazing story in itself, and you can read more about it at
http://www.cariboo-net.com/sentinel/vol2/cameron1.htm. This particular image is at a time in the performance when he is reminiscing about his dead wife and child.

Anyways, after his return, he mined vigorously from April until October of 1863, and the gold was so abundant that it was being mined not by the ounce but by the pan. By October, Cameron had taken out the equivalent of $5 million in today’s dollars and Cameron Co. became the richest claim in the colony.

After a tumultuous past as a goat milker, laundress, fine art major, waitress and restaurant owner, I've now downscaled to running my own Cafe/Gallery in an effort to maintain a social life and make a few bucks. I live a ridiculously idyllic existence in a fairytale village called Bella Coola on the West Coast of British Columbia with my charming musician husband, two amazingly creative children, and a dog whose favourite past time is eating rotten dead fish and rolling in poo. In my not so spare time I love to invent healthy whole food recipes, write YA fiction, play guitar, or curl up in my favourite chair with a great book and a gigantic mug of strong black coffee, all while daydreaming of living in Ireland... View more posts